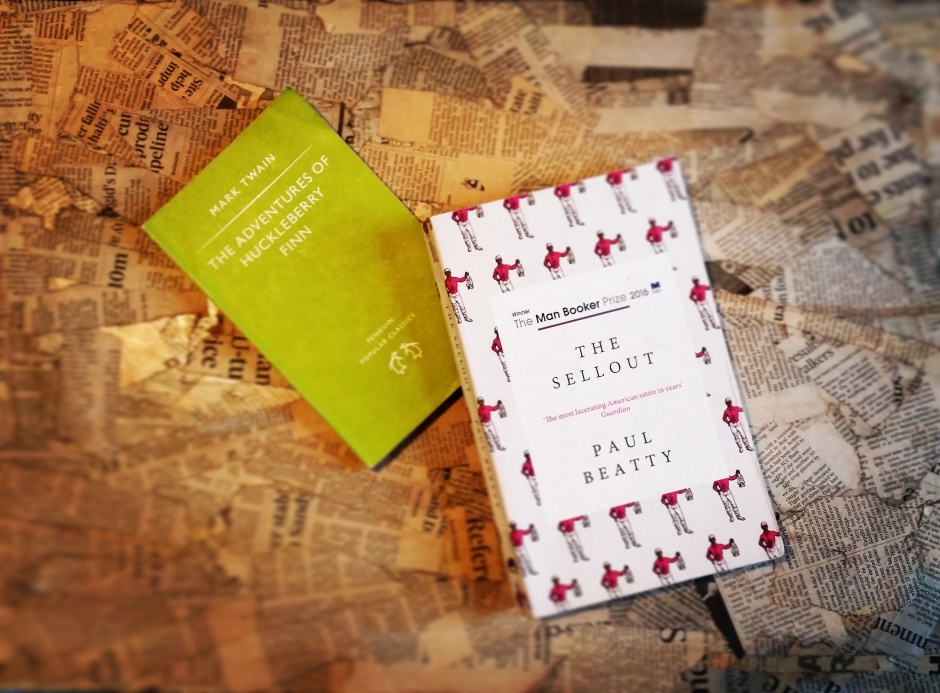 Both of this month’s reads were chosen collectively by the Book Club I’m part of and although it wasn’t an entirely conscious decision, we couldn’t help but read one with the other in mind.

The Adventures of Huckleberry Finn by Mark Twain

I’m pretty sure I was meant to read this for a module during my university days but I’m not sure I got much further than the opening few chapters which had an eerie familiarity. That could also be down to some made for TV, black and white movie which has left some unsuspecting residue in my memory.

While the opening chapters were familiar, it didn’t make them any less sombre. Huck’s childhood may have been a glorified boyish adventure but by modern standards it is also distressing. The constant threat of violence, the child’s sense of his own predetermined failings and his consciousness of his father’s afflictions – it could be a narrative straight out of Eastenders.

“Human beings can be awful cruel to one another.”

You can’t help but feel for Huck… that other little shit though. I should say, I also failed to read The Adventures of Tom Sawyer as part of my university degree so I apologise if actually Tom has some kind of magnanimous character arch which endears him to the reader. Taking him at face value on Huckleberry Finn alone, Tom Sawyer will go down in my reading repertoire as one of the most despised characters of all time. To make fun and amusement out of the suffering of another, and of one so good and kind and vulnerable as Jim. His treatment of Huck is despicable, as is the author’s exploitation of easy plot resolutions but I’d like to hope that Twain’s narrative was intended as a lesson rather than amusement.

I believe this because of the heartbreaking moment when Huck comes to question the principles of society and to follow his own moral compass. He struggles to come to terms with the Christian beliefs he’s been taught by the widow and the ingrained prejudice he has grown up with. He is pained by the guilt of aiding Jim’s escape, cannot pray while he harbours this shame of taking another person’s property. And yet something internal, something learned by his own experience, tells him that he cannot turn Jim in and betray the man who, he realises, has become his friend.

He holds the letter he has penned to Miss Watson to inform her of Jim’s whereabouts, a letter which, having written it, offered him intense relief as though he were clean of sin, lifted the heavy guilt from his shoulders. But he begins to think of his adventures with Jim, how often this man had cared for him, saved him and how he in turn had returned that kindness. Twain does not push Huck (or his contemporary audience) to the full enlightenment of realising just how much danger he saved Jim from or even, how wrong that threat was, but on a personal level, Huck realises a small truth which settles his inner conflict. He does the right thing, yet condemns himself for doing so, believing it to be a sin. In the history of my reading repertoire, Huck will go down as the character I most longed to hug and comfort.

Despite this, I finished the book and promptly threw it across the room in utter disgust. I will never not want to punch Tom Sawyer in his fictional face.

“But somehow I couldn’t seem to strike no places to harden me against him, but only the other kind. I’d see him standing my watch on top of his’n, ‘stead of calling me, so I could go on sleeping; and see him how glad he was when I come back out of the fog; and when I come to him again in the swamp, up there where the feud was; and such-like times; and would always call me honey, and pet me and do everything he could think of for me, and how good he always was; and at last I struck the time I saved him by telling the men we had small-pox aboard, and he was so grateful, and said I was the best friend old Jim ever had in the world, and the ONLY one he’s got now; and then I happened to look around and see that paper.

It was a close place. I took it up, and held it in my hand. I was a-trembling, because I’d got to decide, forever, betwixt two things, and I knowed it. I studied a minute, sort of holding my breath, and then says to myself:

The Sellout by Paul Beatty

I’m not going to lie, I found this book to be a bit of shock to my sensibility to begin with. Like Huck I’d grown up with a sense of what is right and wrong. I have a liberally-minded moral compass, and to have it suddenly jolted by a narrative so downright hilarious – you do have to throw all caution to the wind and just embrace the ludicrous. Because beyond the belly laughs The Sellout is deeply thought-provoking, breathtakingly honest and at times, heartbreaking.

“Dumbfounded, I stood before the court, trying to figure out if there was a state of being between ‘guilty’ and ‘innocent.’ Why were those my only alternatives? I thought. Why couldn’t I be ‘neither’ or ‘both’? After a long pause, I finally faced the bench and said, ‘Your Honor, I plead human.’”

Beatty delivers his verdict on racism and poverty with a bite that Mark Twain would applaud – how right that his book should feature too. As a writer I learned a hell of a lot from this book, and I know it has much more to teach me. I will return to it again, and probably again, and again.

“That’s the problem with history, we like to think it’s a book—that we can turn the page and move the fuck on. But history isn’t the paper it’s printed on. It’s memory, and memory is time, emotions, and song. History is the things that stay with you.”